2017 was far closer to the “Year of VR” that everyone promised a year earlier – new head-mounted displays from Microsoft’s spec (Acer, Lenovo, Hewlett-Packard, Samsung), peripheral updates – HTC Vive Tracker, and major permanent price cuts across all platforms meant higher adoption. Games and apps improved beyond being mere demo-grade downstream shovel-ware as the early developers matured into major players. 2018 will advance all of these elements substantially, and as arcades evolve and Spielberg enters the fray with the spring release of Ready Player One, mainstream awareness will start to trickle in.

Among the offerings that came out in 2017, here are those experiences we found most succinct and worth of your time.

Despite the goofy premise, this game about taking apart cats and putting them back together again as a worker on an assembly line in some feline equivalent to Willy Wonka’s chocolate factory captured the public imagination – and mainstream media attention – in ways that few other VR releases did this year. Helping elevate Cat Sorter VR from a novelty game are the cats themselves, which feature mutations like extra eyes or scorpion tales, making the whole process all the more addictive. This fusion of cute and creepy were enough to garner the Aesthetic Award at IndieCade 2017.

Instead of destructible environments and explosions, the theme this time around is spiked clubs and fisticuffs – not to mention ludicrously huge blood droplets spattering everywhere each time a swing connects with a face. 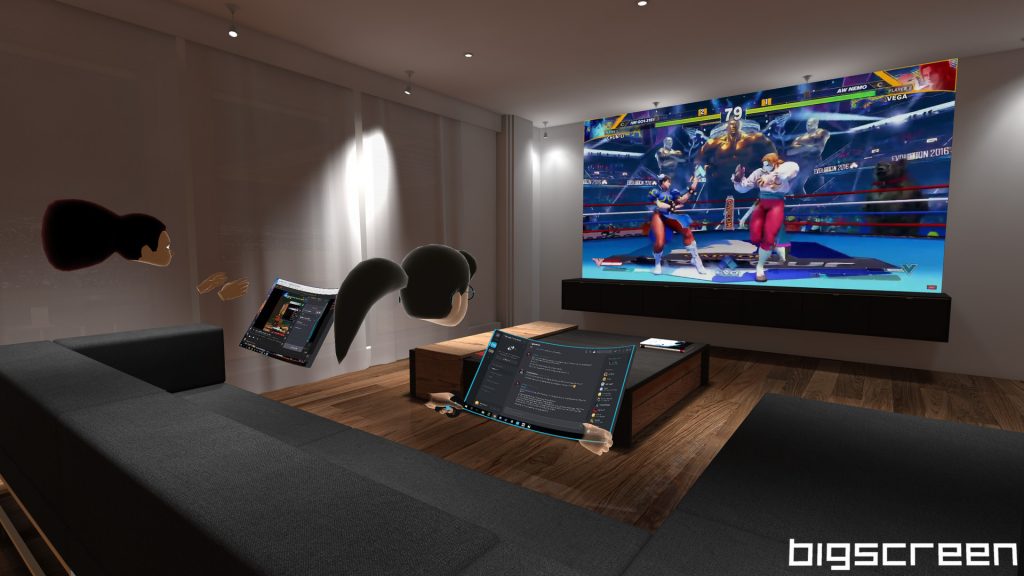 Bigscreen is a recently socialized virtual desktop app for Vive and Oculus Rift that lets you echo your desktop in virtual space. You can play games, scribble, throw a LAN party – we have yet to figure out how to not spill Mountain Dew in our lap while doing so – and most obviously, watch movies with others in a virtual theater. Spatialized voice chat ensures you can echolocate your buddies in the metaverse.

You can also manipulate screens with controllers or even Leap Motion‘s IR-based input method. They recently hosted an online viewing party of Top Gun in 3D. Now VR starts to demonstrate how it is unlike any other medium.

Oculus Rift | 1.5 GB | FREE from the Oculus Store or from Steam

VR’s strength is its use of space to create experience, and what science fiction fan wouldn’t want to visit location as iconic as the bridge of the U.S.S. Enterprise? Star Trek Bridge Crew gives players the chance to not only explore the bridge but also team up with friends online “to boldly go where no man has gone before.”

from Ready at Dawn

Lone Echo draws on hard science fiction, both classic (Arthur C. Clarke) and modern (The Expanse), setting players to work investigating weird goings-on aboard a space station orbiting Saturn. Apart from its puzzles and evocative renditions of believable technology as well as the awe-inspiring feeling of space, the game excels at locomotion, giving players an experience of zero gravity without the attendant expense of training at NASA or chartering a reduced-gravity aircraft.

If that all sounds too esoteric and thought-provoking, there’s also the included Echo Arena spin-off, a multi-player zero gravity sports game a bit like Ultimate Frisbee.

An interactive fairy tale from Funomena (best known for such acclaimed works as Journey and Flower), our favorite VR game of the year is so perfect because of its use of space to both tell a story and offer up gaming elements in a space-based diorama filled with wonderful nature pastiches. Its puzzles are fairly easy, but are fun and addictive enough to keep us pulling at spiderwebs not to progress in the game, but just because we enjoyed the sensation so much. Delightful art and a score by Austin Wintory made Luna a memorable and joyous experience.

Other Major Releases of Interest

This is no mere update but a sea change, catching up to Steam and Windows MR to allow you to build your own crib the way you like it. The Rift 2.0 Core update adds so many features it becomes an experience all unto itself. Allowing you to bring your own Medium creations into your animated, customized home base adds to the joy. Socialized features and virtual desktops via the new Dash interface make it harder than ever to leave once you’re in. The first steps towards the universe envisioned in Ready Player One.

VRChat is STILL technically in Early Access – and even while AltSpace died and cried and then Palmer Luckey considered buying it with cash and then Microsoft actually did and while High Fidelity looks amazing but no one is there and it takes FOREVER to load and while Project Sansar looks even BETTER than that and has cryptocurrency but no one uses it yet – VRChat crept up and grabbed society by the jugular, and now grandmas and kids and drunk uncles all can’t get enough of it. Amazing to see a sleeper pop like this and restore hope for us all.

Although VR implementation for Google Earth actually arrived in 2016, this year has seen major updates to the project, including faster load times and – more significantly – direct integration with Google Street View. A terrific travelers’ pre-visit tool and surprisingly emotional.

As VR games and experiences continue to progress, we’re more than a little excited to see what 2018 has to offer, but in the meantime, what were your favorite Oculus offerings of the past year?