Pearl Hyacinth is the avatar created by Melody Owen to explore virtual worlds. Owen is a conceptual ecomedia and multi-disciplinary artist and writer from the mossy, green state of Oregon. She is represented by Elizabeth Leach Gallery in Portland and is currently studying virtual reality and animal voices as a PhD candidate at the University of New South Wales in Sydney, Australia. View all posts by Pearl Hyacinth →

Karnage Chronicles is a classic fantasy adventure game in which the goals are to collect treasure, complete quests and generally survive a world jam-packed with murderous creatures.

It takes place in a rocky cave setting peppered with over-sized organic plants and minerals and mushrooms, all of which are breathing or swaying or glowing. The ground itself – when you first log in – is the least believable aspect. But once you get into the game and are looking out for enemies and coins, you no longer notice the ground.

The plants and mushrooms are familiar but alien in their luminescence. They give tangible life to the environment. 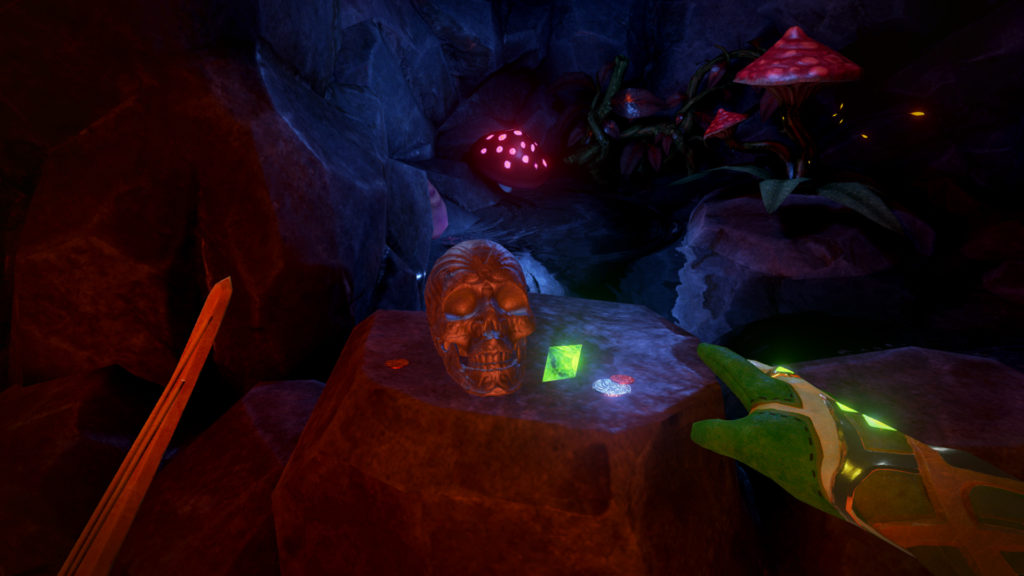 The NPCs in the game are similar in style and reminiscent of The Dark Crystal – Jim Henson’s 1980s fantasy, life-sized mechanical puppetry. The usual cast of characters is present: trolls, goblins and wizards. There are also handsome, lion-like wolves which I regretted having to kill and pretty – but truly terrifying – giant spiders, as well as extra aggressive bees which I mistook for mosquitoes.

The sound is visceral and presence-inducing – cavelike dripping and echoing – and when the whispers and the music come in, it increases the tension and suspense. There are both menacing sounds and satisfying ones, like the sword cutting through the air with a swoosh.

As is common in VR, you can choose to move by gliding forward or teleport ahead in jumps. Jumping is less taxing on the brain (in terms of cumulative nausea), and you can see a shell of your armored character ahead as you advance into each jump.

There is a wealth of options in terms of levels and paths and portals, and it seems you could play for weeks. The incessant battling has the potential to become monotonous – as in Hobbit 1, 2, and 3 – but Karnage is the name of the game.

The adventuring, collecting, and discovering part is quite enjoyable, and though I played alone, I imagine it would be even more so with friends.

The gameplay is intuitive and the weapons are extremely effective. It is so fun to physically pull the bow and shoot an arrow that really flies and hits the mark – or doesn’t. (The trolls can duck really well.) Either way, it brings you right into the cave and into the game.

You carry all the items you find and collect on a belt that you can hide and unhide.

One word of caution to whoever writes the script: girls might like to play this game, too, and gratuitous jokes about female anatomy – even very small jokes – can serve to alienate and subtly say “this world is for boys.” Not to mention what it says to the boys.

The default – and really only – character gender is male. Some choice would be nice. But, at least respect for all humans and players is, in itself, valorous. 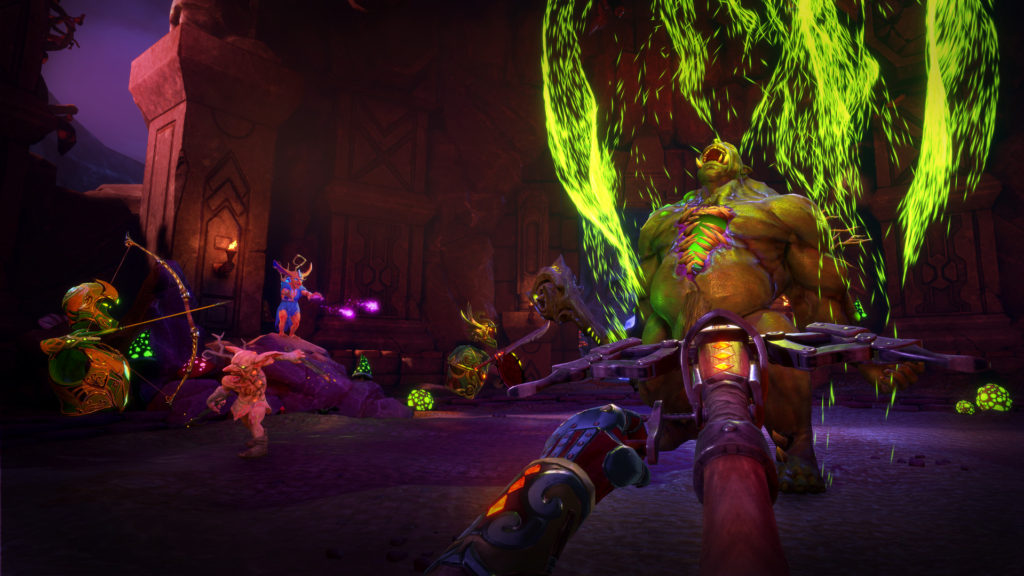 Karried off into a Fantasy World

It is like a lot of treasure-seeking adventure/battle games. It has all of the same elements – quests, keys, weapons, potions, puzzles, food to nourish you, foes to battle, challenges to face – but the medium of VR raises the stakes and the visceral quality.

Even though it is classic fantasy fair, there is a real sense that you are actually gathering when you scoop things up and collect them; there is a sense of danger, knowing that any kind of terrifying creature might run at you from behind a rock. And when you are fighting in battle, you are right in there. 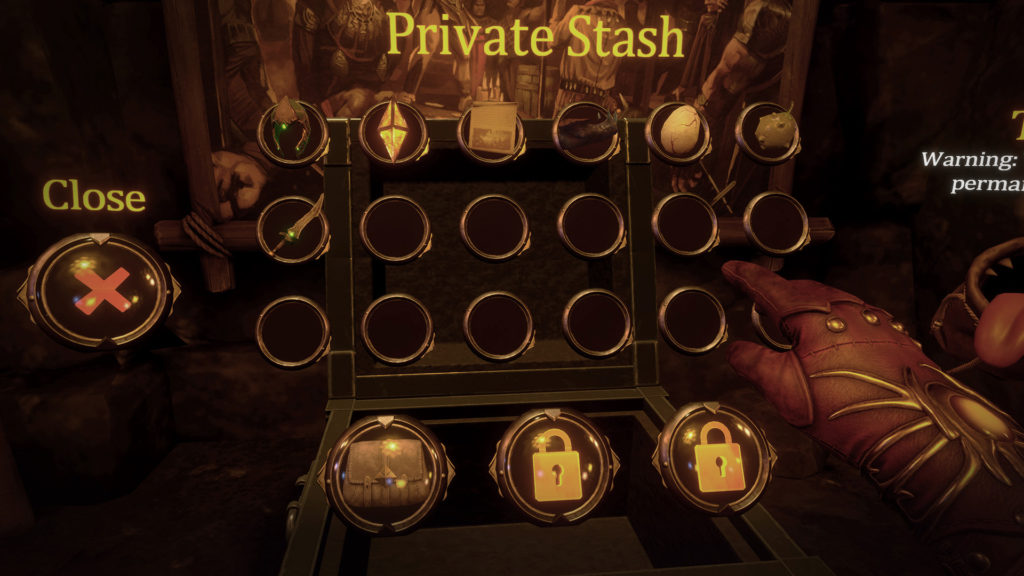 There were a couple of times when I was exchanging arrows from a distance with an enemy, and I felt just like I was inside a movie. When he shot at me, I could actually jump behind a pillar and then jump out to quickly aim my arrow at him before he got a chance to shoot again. That was amazing.

A little bit later, when the giant spiders jumped on my head, I screamed out loud and had to pull off the headset as they piled on top of me. A great game for lovers of the fantasy genre – and for those who like to battle and quest.