TinyBuilding a Stage Presence in VR

tinyBuild GAMES, the indie publisher behind such games as Boid, SpeedRunners and No Time to Explain, has announced its first virtual reality offering: Stage Presence.

Designed by Manchester, UK studio Sea Green Games, the developers rather cheekily describe Stage Presence as “a microphone-based music festival and angry mob simulator.” Virtual reality explorers take on the role of lead singer for a band…right when the power cuts out. Players are then required to do their best to keep the virtual audience entertained using only the power of their voice.

Sea Green Games’ approach to Stage Presence appears to be inspired as much by horror – albeit a more mundane sort of horror than the usual zombies and giant spiders – as by the fantasies catered to by games like Guitar Hero. Your primary goal is to keep the crowd from booing you off the stage.

Adding insult to injury, Stage Presence features multiple methods of online humiliation. Players can invite their friends to join the virtual crowd, and said friends can then express their distaste with your singing voice by throwing bottles of urine at you (although if they’re throwing bottles of urine at you, maybe they’re not really your friends).

If you’d prefer to be humiliated by strangers, you’ll also have the ability to not only stream your session on Twitch, but you can let the Twitch chat channel control the crowd. 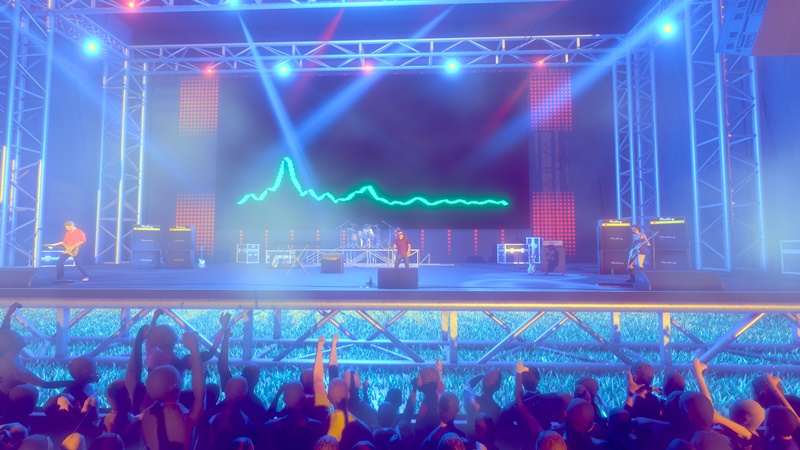 Furthering the Twitch connection, Stage Presence bears the distinction of being the first VR to be shown live on the Twitch stage at PAX East, which took place over the weekend of April 22nd to 24th in Boston, Massachusetts.

Stage Presence is due for release this summer on Steam and for the Oculus Rift.

In the meantime, watch the announcement trailer below: